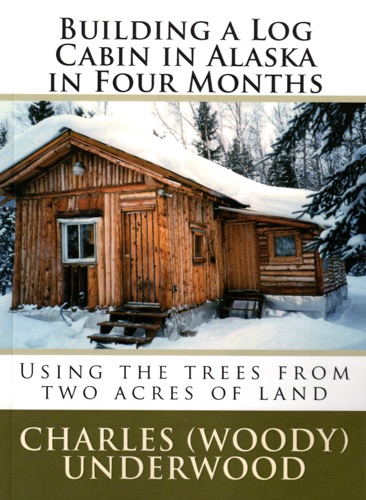 This book should be helpful as a “how to” guide for a man working alone to build a strong, yet simple log cabin made to last. It can be a log cabin that a man can be proud to call his home or for a getaway home on the weekend. I built the 13 by 41 foot cabin shell, including cutting down the trees and peeling off the bark, in three months while camping out in a tent. Cutting down the trees and peeling off the bark took more than half of the time in completing the shell of the cabin. It was hard work, but by using the trees on my property, and a couple that I got off the river’s gravel bar, I saved money and it gave me a more satisfying feeling of accomplishment as I lived my dream. I did the work by myself without anyone or any heavy log moving equipment helping. My wife, Su, and my then seven year old son, Anthony, helped me to work on the cabin mainly by freeing me from having to cook, clean, and do other daily chores while the cabin went up. We lived in a tent on our property for 4½ months as we built the cabin. The extra month and a half was needed due to the not expected deep snow upon our arrival in March in Alaska, and having to survey the land before I could start cutting down trees. I give some special pointers that will help with building a log cabin in a cold, snowy place like Alaska, but most of what I write can be used to build a log cabin in a forested area anywhere. After three months’ work the cabin shell was up and we moved from our tents into the cabin, however, the well and plumbing, septic system, woodstove chimney, interior walls, electrical wiring, and 8 by 28 foot add-on to the side of the cabin, which are covered in varying details (less on the wiring and plumbing) in this book, were worked on as I got the time and money. Overall, to complete the cabin, it took about four to five months of my time. The 757 square foot cabin was completed in about four months’ time working long hours, six days a week. The long camping experience was an ordeal for my wife, but my son and I enjoyed it. We thank God for His help and guidance through it all. The plans contained in this book are designed to allow a man working alone to build a cabin in a short time that will last a life time. I include an additional chapter about building a pergola type patio cover out of red cedar. 59 pictures are included in this book. My first trip to Alaska was in 1981 when I went there looking for adventure and prospecting for gold.