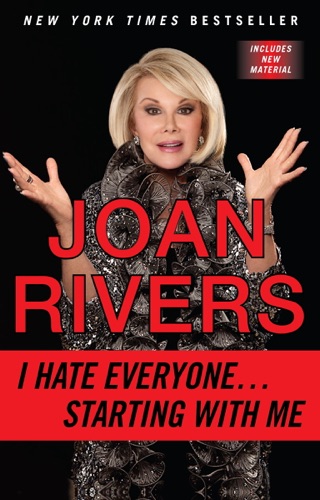 “An entertaining rant…The only thing missing is the sound of a drumroll and cymbals to feel as though one is sitting in a nightclub watching a live comedy marathon…A raucous, biting look at life.”—Kirkus Reviews

“Nobody, but nobody, can hate like Joan Rivers. It is a gift. It is also shocking, the things she makes us laugh at…Joan Rivers is extraordinary, but she's not for the easily offended—or for anyone who gets offended at all.”—People

Joan Rivers, comedienne, actress, jewelry monger, and an award-winning international star (she can sneer in eight different languages) lives by her own golden rule: Do unto others before they do unto you—and for God’s sakes, do it funny!  Her career in comedy may have begun with self-loathing, but, after looking at the human decrepitude around her, she figured Why stop here when there are so many other things to hate? With all of her diverse experiences, Joan has looked down at, turned away from, and thrown up over a lot of hateful things, deplorable places, and despicable people. Thank God she took notes.

Here—uncensored and uninhibited—Joan says exactly what’s on her mind…And HER mind is a terrible thing to waste.  She proudly kicks the crap out of ugly children, dating rituals, funerals, and lousy restaurants. She nails First Ladies, closet cases, and hypocrites to the wall. She shows no mercy towards doctors and feminists, and even goes after Anne Frank and Stephen Hawking.  Joan lets everyone—including herself—have it in this one hundred percent honest and unabashedly hilarious love letter to the hater in all of us.