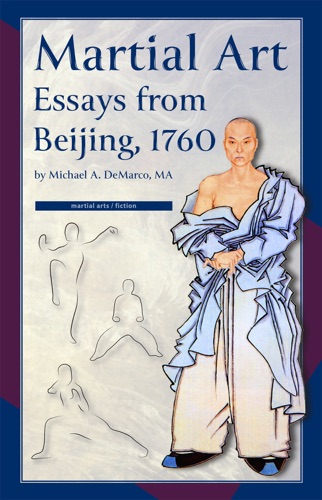 The themes in this book—drawn from Chinese history, culture, and martial arts experience—are entwined in a fictional narrative to animate events envisaged to have occurred during the mid-eighteenth century. From the outset, a thin veil separates fact from fiction. Our story starts with a discovery.

While conducting research at the Vatican Library on the Jesuit missions in China, two scholars find a folder of papers written in Chinese among documents belonging to Giuseppe Castiglione (1688–1766), a painter at the royal court in Beijing. The papers turn out to be written by a fellow court painter, Yang Mingbin (c. 1664–1765). Yang’s handwritten essays provide revelations vital for understanding the ingenuity of Chinese martial arts.

Yang’s text is organized under sixty-four subheadings. The author elucidates theory and practice methods in a fashion unlike any other writings on this subject. This is a rare early text written during a transitional period for martial arts. It is the time when the Qing Dynasty (1644 to 1912) was at its peak of cultural splendor and expanding its borders by military expeditions. Cannons and smaller firearms show the Western influence, but traditional martial arts were ubiquitous in the village, province, and national levels.

Master Yang offers fascinating reading on all aspects of the Chinese fighting traditions. He places great emphasis on the importance of the “martial arts family” and the role of secrecy in lethal arts. The arts are also adapted for health and entertainment. All reflect an infusion of philosophy and practices from Buddhism, Daoism, and Confucianism. How one thinks affects how one practices martial arts.

Yang describes the qualities associated with different skill levels, from beginner to most advanced. As he does this, we learn secrets that set forth key ways for improving defensive and offensive applications. These topics include body alignment, coordination, spontaneity, naturalness, balance, distancing, relaxation, and power. The same principles apply to bare-hand and weapons practice, as well as martial arts for health. Yang’s learning methodology for studying martial arts can be useful in other areas, as in his work as a master painter at court.