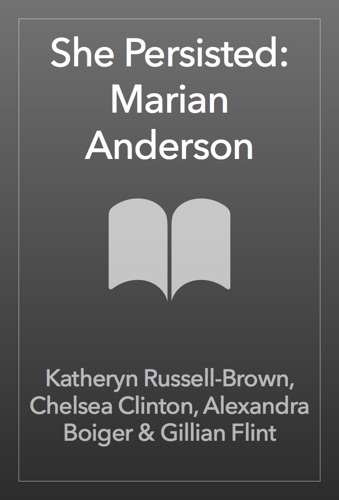 Inspired by the #1 New York Times bestseller She Persisted by Chelsea Clinton and Alexandra Boiger comes a chapter book series about women who spoke up and rose up against the odds--including Marian Anderson!

When renowned classical singer Marian Anderson wasn't allowed to sing at a theater in Washington, DC, because she was Black, First Lady Eleanor Roosevelt invited her to sing at the Lincoln Memorial, at a concert attended by thousands of people. Marian went on to sing around the world on behalf of the UN and the US State Department, and as a part of the Civil Rights Movement, she also performed at the March on Washington. She went on to win many awards, including the first ever Presidential Medal of Freedom and a Grammy Lifetime Achievement Award--and she inspired countless people along the way.

In this chapter book biography by award-winning author Katheryn Russell-Brown, readers learn about the amazing life of Marian Anderson--and how she persisted.

Complete with an introduction from Chelsea Clinton, black-and-white illustrations throughout, and a list of ways that readers can follow in Marian Anderson's footsteps and make a difference!

And don’t miss out on the rest of the books in the She Persisted series, featuring so many more women who persisted!