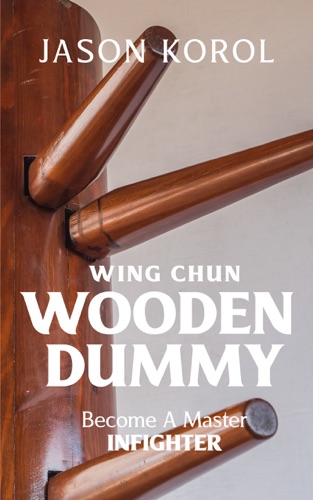 The Wooden Dummy is the heart and soul of Wing Chun. Not only is it really cool (there’s nothing else quite like it) but it provides the Wing Chun fighter a master course in actually applying the material from the three empty hand forms, Siu Lim Tao, Chum Kiu and Biu Jee. In this book you’ll learn not just the form itself, with the proper positioning and structure, and the names of the techniques, but you’ll get the rich material you need to truly understand the action. That’s the key. Each movement isn’t just shown but it’s detailed and explained so that you aren’t just “going through the motions” mindlessly without knowing the critical reasons for the action. If you’re a fan of the author’s YouTube channel, you’ll love this highly intimate guide through the form - it’s like a private lesson in a book. You’ll learn to avoid the two extremes of wooden traditionalism and hyper individualism. Traditionalism often makes the mistake of treating the dummy form like it’s a religion, rather than a series of application concepts to be studied, practiced and internalized so that the reflexes are there when you need them - in the event of a sudden and unavoidable violent attack. Hyper individualism is what you see often in JKD unfortunately. People have been told that they don’t need to learn the form so they freelance on it all the time. But that’s like telling someone to play guitar without teaching them the chords. Creativity presupposes the proper foundation. In fact, each section of the dummy form can be seen as a form unto itself - providing deep insights into the nature of sudden combat. For this reason alone, a careful study should be made of the Mook Jong. For example, of the seven traditional sections, five of them feature kicks as either the primary tools or, at least, highly important weapons to be deployed. And these kicks are taught to be used at extremely close-range, destroying the knees and legs of the enemy. Plus, you’ll see how Wing Chun is an ingenious science of close-quarter footwork and shifting, as well as pulling and pushing. Not understanding the Mook Jong has led a generation of Wing Chun fighters to wrongly believe that the system is mainly the chain punch and chi-sao. This book will give you the keys you need to understand what so many of us are missing about the world’s premier close-range self-defense method. The dummy form will show you that Wing Chun isn’t about mutual combat - sport fighting - but defending yourself in cluttered environments. You’ll learn that Wing Chun is all about striking, chopping, gouging, pushing, pulling, grabbing, and kicking - all while stepping and shifting constantly. This is the method you need to learn for the real world - for defense in your doorway against a home invader, or in-between cars in a parking lot and places like that. Learn these skills and getting into a fight with you at close-range (what other kind of self-defense situation is there?) will be like trying to kidnap John Wick’s dog. Kind of like that…without the gunfire, of course. Each section and action is meticulously broken down for you so you won't waste your time rehearsing techniques you don't understand. Lastly, you’ll also get an informative and entertaining historical overview of both Wing Chun as a whole and the Mook Jong too so that you understand where everything fits into the modern era.