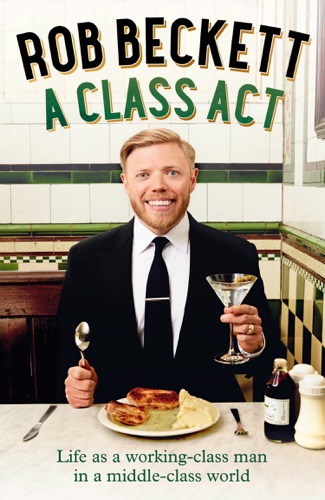 Rob Beckett never seems to fit in. At work, in the middle-class world of television and comedy, he’s the laddie, cockney geezer, but to his mates down the pub in south-east London, he’s the theatrical one, a media luvvie. Even at home, his wife and kids are posher than him.

In this hilarious exploration of class, Rob compares his life growing up as a working-class kid to the life he lives now, trying to understand where he truly belongs.

Will he always be that fat kid who was told he’d never be a high-flyer? Why does he feel ashamed if he does anything vaguely middle class? Will he ever favour craft beer over lager? What happens if you eat 50 olives and drink two bottles of champagne? Why is ‘boner’ such a funny word?

In search of answers, Rob relives the moments in his life when the class divide couldn’t be more obvious. Whether it’s the gig for rich bankers that was worse than Matt Hancock hosting the GQ Men of the Year Awards, turning up at a swanky celebrity house party with a blue bag of cans from the offy or identifying the root of his ambition as a childhood incident involving soiled pants and Jurassic Park, Rob digs deep.

A Class Act is his funny, candid and often moving account of what it feels like to be an outsider and the valuable (sometimes humiliating) life lessons he’s learned along the way.

Rob Beckett burst onto the comedy circuit ten years ago and hasn’t looked back since. From working on a flower market to hosting the Royal Variety Performance, Children in Need and Comic Relief, he’s come a long way. Besides being the unmistakable voice of Celebs Go Dating, he also fronts his own Sky One show, Rob & Romesh Vs, with best mate Romesh Ranganathan and is a team captain on Channel 4’s 8 Out of 10 Cats. He has also made regular appearances on 8 Out of 10 Cats Does Countdown, Taskmaster and Mock the Week. ln 2020, Rob and fellow comedian Josh Widdicombe launched Parenting Hell, the No. 1 podcast in which they interview fellow parents on their parenting successes and (more often) failures. Rob continues to tour with his live comedy, most recently with his critically acclaimed show Wallop! A south-east Londoner born and bred, Rob now lives in Kent with his wife Lou and their two daughters. This is his first book.