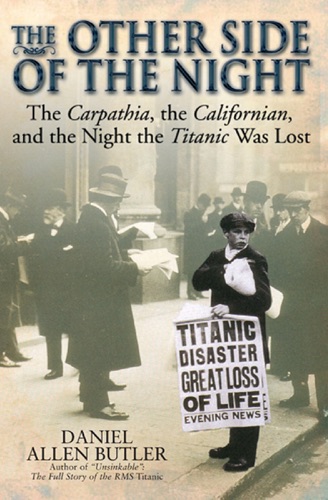 The New York Times–bestselling author of Unsinkable “recounts the disaster from the vantage point of nearby vessels” (Publishers Weekly).

A few minutes before midnight on April 14, 1912, the “unsinkable” RMS Titanic, on her maiden voyage to New York, struck an iceberg. Less than three hours later, she lay at the bottom of the Atlantic Ocean. While the world has remained fascinated by the tragedy, the drama of those fateful hours was not only played out aboard the doomed liner. It also took place on the decks of two other ships, one fifty-eight miles distant from the sinking Titanic, the other barely ten miles away.

The masters of the steamships Carpathia and Californian, Capt. Arthur Rostron and Capt. Stanley Lord, were informed within minutes of each other that their vessels had picked up the distress signals of a sinking ship. Their actions in the hours and days that followed would become the stuff of legend, as one would choose to take his ship into dangerous waters to answer the call for help, while the other would decide that the hazard to himself and his command was too great to risk responding.

After years of research, Daniel Allen Butler now tells this incredible story, moving from ship to ship on the icy waters of the North Atlantic—in real time—to recount how hundreds of people could have been rescued, but in the end, only a few outside of the meager lifeboats were saved. He then looks at the US Senate investigation in Washington, and ultimately, the British Board of Trade inquiry in London, where the actions of each captain are probed, questioned, and judged, until the truth of what actually happened aboard the Titanic, the Carpathia, and the Californian is revealed.