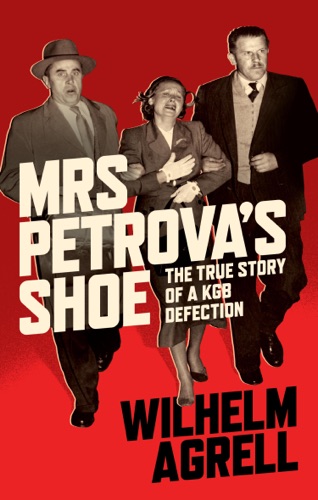 Two men are holding a woman between them in a firm grip. In one hand she is carrying her handbag; the other she places on her heart. The man on her right stares into the camera, his colleague stares resolutely ahead. But there is something else, something missing. The despairing woman is wearing only one shoe.

On 19 April 1954 the world was gripped by an unfolding drama at Sydney Airport. A small, seemingly fragile woman, was being aggresively marched to an awaiting plane by two burly men. Evdokia Petrova was the wife of Soviet diplomat Vladimir Petrov who, two weeks earlier, had defected from the embassy in Canberra after a prolonged 'cultivation' by the Australian Security Service, supported by MI5. Evdokia was now being hurried back to Moscow by the KGB. The subsequent intervention by Australian Prime Minister Robert Menzies kept the world's media on tenterhooks. But who were the couple at the centre of this global news story?

After the defection it turned out that Evdokia was, in fact, an even bigger catch than her husband. With a background both in cryptological work in Moscow and in field operations, she was able to supply Western intelligence with a wealth of information and insight into the workings of the Soviet intelligence system. With access to newly-released archives and sources, this book sheds extraordinary new light on the two people at the heart of the Petrov Affair, one of the most bizarre stories of the Cold War era.