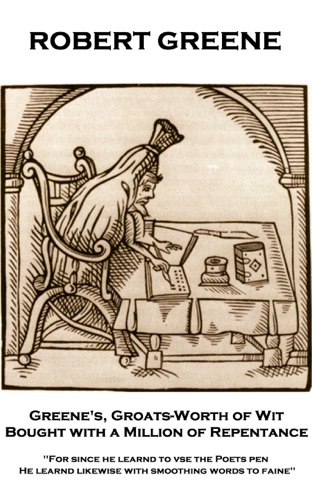 Robert Greene was, by the best accounts available, born in Norwich in 1558 and baptised on July 11th.

Greene is believed to have been a pupil at Norwich Grammar School and then attended Cambridge receiving his B.A. in 1580, and an M.A. in 1583. He then moved to London and began an extraordinary chapter in his life as a widely published author.

His literary career began with the publication of the long romance, ‘Mamillia’, (1580). Greene's romances were written in a highly wrought style which reached its peak in ‘Pandosto’ (1588) and ‘Menaphon’ (1589). Short poems and songs incorporated in some of the romances attest to his ability as a lyric poet.

In 1588, he was granted an MA from Oxford University, almost certainly as a courtesy degree. Thereafter he sometimes placed the phrase Utruisq. Academiae in Artibus Magister', "Master of Arts in both Universities" on the title page of his works.

The lack of records hinders any complete biography of Greene but he did write an autobiography of sorts, but where the balance lies between facts and artistic licence is not clearly drawn. According to that autobiography ‘The Repentance of Robert Greene’, Greene is alleged to have written ‘A Groatsworth of Wit Bought with a Million of Repentance’ during the month prior to his death, including in it a letter to his wife asking her to forgive him and stating that he was sending their son back to her.

His output was prolific. Between 1583 and 1592, he published more than twenty-five works in prose, becoming one of the first authors in England to support himself with his pen in an era when professional authorship was virtually unknown.

In his ‘coney-catching’ pamphlets, Greene fashioned himself into a well-known public figure, narrating colourful inside stories of rakes and rascals duping young gentlemen and solid citizens out of their hard-earned money. These stories, told from the perspective of a repentant former rascal, have been considered autobiographical, and to incorporate many facts of Greene's own life thinly veiled as fiction. However, the alternate account suggests that Greene invented almost everything, merely displaying his undoubted skills as a writer.

In addition to his prose works, Greene also wrote several plays, none of them published in his lifetime, including ‘The Scottish History of James IV’, ‘Alphonsus’, and his greatest popular success, ‘Friar Bacon and Friar Bungay’, as well as ‘Orlando Furioso’, based on Ludovico Ariosto's Orlando Furioso.

His plays earned himself the title as one of the ‘University Wits’, a group that included George Peele, Thomas Nashe, and Christopher Marlowe.