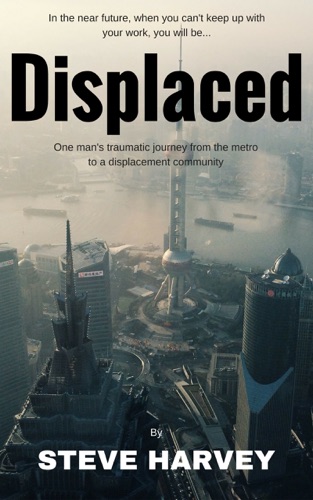 This is the story of Ian, a man who unable to keep up with the pace of his work, is removed from not only his job but his home and lifestyle too. After many years of frivolous spending and following all the new trends he is displaced from his home in the metro and his hopes for the future. He is sent to a work camp where there is some small hope that he may one day return to the metro and take up his old job. When this seems unlikely, once again due to his inability to keep up with the demands of his job, he decides to take a huge gamble. He modifies his android work 'companion' to a higher level of intelligence in the hope that his job performance would improve. This has disastrous results when the android first questions the consumerist existence and then runs amok, almost killing one of Ian's work colleagues. Rather than being sent back to the metro Ian is sentenced to the displacement community, a final stage in eliminating those who are unfit for normal society. Expecting the worst Ian finds himself in a friendly hard-working farming community which he struggles to fit into. On the verge of suicide he is drawn into helping with an emergency which gives him the perspective he needs to see his life for what it really is.